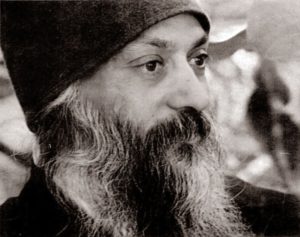 During his lifetime, he was considered a controversial mystic and the leader of a new religious movement, even though he called himself an “ordinary man”.

In the 1960s he traveled throughout India as a public speaker emphasizing the importance of meditation, mindfulness, love, celebration, courage, creativity, and humour— qualities that he viewed as being repressed by adherence to static belief systems and religions. By advocating a more open attitude towards human sexuality, he provoked strong controversy in India in the late 1960s, which made him know as the “sex guru”.

In 1970 Rajneesh spent time in Mumbai giving initiation to many followers whom he called “neo-sannyasin”, in provocative contrast to the traditional sannyas which involved withdrawing from the mundane world. During this period he expanded his spiritual teachings by widely commenting on the writings of religious, mystical and philosophical traditions from around the world.

In 1974, Rajneesh moved to Poona, where an ashram was founded which offered to the growing western following a variety of meditative therapies, drawn from both Eastern traditions and the methods developed in the West by the Movement for the Development of Human Potential. It is in this period that Radha arrived in Poona and since then she has always been close to her Master.

Osho’s teachings and methods have had a significant impact on Western New Age and their popularity has increased further since his death.

Discover all the courses and events scheduled!